Images of Delight Exhibition at Foyles

There will be new work on display by all of the illustrators listed above.

Don't miss this wonderful opportunity to meet, chat and have your books signed by some of the most talented illustrators around!

We are all born free 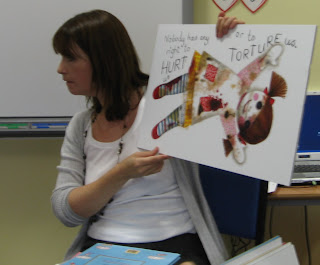 Jane Ray talking to children at Saxmundham Primary School, Suffolk as part of a series of workshops leading to a school art exhibition during the Halesworth Arts Festival. Jane has contributed a very moving and compelling image for the book. The exhibition will be opened by John Burningham, who has contributed to We are all born free , on Saturday 11 October and the exhibition will be open every weekend throughout the festival (11 October to 26 October). The splendid publication is published on 9 October by Frances Lincoln. There will be an article about this important book in the next edition of Carousel.

Posted by Carousel at Wednesday, September 24, 2008 No comments:

The Illustration Cupboard is one of those rare galleries that actually welcome children. Do grab the chance to see the original illustrations for The Church Mice by Graham Oakley...a real pleasure for us who remember them first time around and a joy to come for those who have yet to discover them.


Celebrating the new edition of this much-loved classic story.
Signed books and the original artwork

10am to 6pm Monday to Friday
12pm to 5pm Saturday
Families welcome
Posted by Carousel at Thursday, September 18, 2008 No comments:

This summer young people up and down the country have been reviewing books for this year’s YoungMinds book award – and following their feedback, YoungMinds, the leading children’s mental health charity, is delighted to announce the six shortlisted books for 2008:
Singing it, by Anne Cottringer (Andersen Press Ltd) - the tale of Flower, a defiant loner because of incessant travel, who learns the confidence to sing in public and trust in friends. “This was an amazing book,” commented one young reviewer. “As evidence I can tell you that I stayed up until 10:02 pm reading it.”
The way I see it, by Nicole Dryburgh (Hodder Children’s Books) - a teenager’s own story of her fight to rebuild her life after cancer. Aged 11, Nicole was diagnosed with a malignant tumour on her spine and after a brain haemorrhage at 13 which left her blind she was expected to live for only weeks. Now 19, Nicole - still blind, unable to walk and losing her hearing - is always busy, whether writing, fund-raising, travelling, or socialising with friends. “An inspiring story of a positive young lady and her fight against cancer,” was one reviewer’s verdict.
Accidents of nature, by Harriet McBryde Johnson (Andersen Press Ltd) - about a teenager with cerebral palsy who is experiencing her first time away from her parents. Comments included: “This book was amazing! It helped my perspective on disabled people greatly change. I now realise they can be independent and they are their own person. Five stars – way to go Harriet McBryde Johnson.”
The knife that killed me, by Anthony McGowan (Definitions) - a thought-provoking story that highlights the terrible consequences of peer pressure, and casts a spotlight on the rise in knife crime among teenagers. One young reviewer said: “I would recommend it as an easy read book that highlights some of the problems faced by youth today. It gave the reader a real insight into the thoughts of the main character.”
Accidental friends, by Helena Pielichaty (OUP Oxford) - when four young people are thrust together on their first day at college they form an uneasy alliance that turns to friendship – until a life threatening accident tests that friendship to the limit. “The style in which the book was written kept it exciting and made it very different. I felt really connected with the characters and I also found the book quite easy to read.”
From where I stand, by Tabitha Suzuma (Definitions) - the story of Raven, a boy who has been placed in foster care after witnessing the death of his mum. He and his friend Lotte set out to track down his mum’s killer - but their careful plan goes dangerously wrong. “I think that this is one of the best books I have ever read. The characters are very believable and plot is really good, especially the twist at the end.”
Relaunched this year, the YoungMinds Book Award 2008 will be given to a book for readers of 12 + which helps young people to cope with the challenges of growing up.
Sarah Brennan, YoungMinds Chief Executive, said: “Books can play a vital role in promoting the mental and emotional well being of young people. They can help break the isolation experienced by young people and demonstrate that their feelings and problems are not unique.”
The panel of judges will now choose the winner of the £2000 prize, to be presented at a gala ceremony at the Unicorn Theatre, London, on Monday November 17, following the YoungMinds Annual Lecture.
This year’s judges are:
Imran Ahmad, author of Unimagined: a Muslim boy meets the west – shortlisted for last year’s YoungMinds book award;
Steve Barrett, editor of Media Week and a YoungMinds trustee;
Grace Dent, author of Trainers vs Tiaras- Diary of a Chav;
Jon East, BBC Children’s Head of Drama;
Honor Fletcher Wilson, project director, National Year of Reading;
Sue Mongredien, author of Royal Ballet School Diaries;
Mike Shooter, chair, YoungMinds;
Becky Stradwick, senior buyer for children’s books, Borders.
Posted by Carousel at Thursday, September 18, 2008 No comments:

The Old Possum’s Children’s Poetry Competition for 7-11 year olds starts accepting entries today. The Children’s Laureate, Michael Rosen, is the Chair of the judges for the second year running. The Competition is organised by the Children’s Poetry Bookshelf, a poetry book club for young people run by the Poetry Book Society. To link with National Poetry Day on Thursday 9 October, children will be asked to write a poem of no more than 25 lines on the theme of ‘Work’.

Joining Michael Rosen is a distinguished panel of people who are passionate about poetry, consisting of Gaby Morgan, anthologist and Editorial Director in charge of the poetry list at Macmillan Children’s Books; Rosemary Stones, Editor of Books for Keeps; Fiona Waters, Editorial Director of Troubadour and poetry anthologist; and Cliff Yates, poet and Deputy Head of Maharishi School.

Now in its third year, the competition has been renamed the Old Possum’s Children’s Poetry Competition after T S Eliot’s much-loved children’s poetry collection about cats. It is open to both individuals and schools, with prizes being awarded in two age groups, 7- 8 year olds and 9 -11 year olds. Entries will be accepted from today, Thursday 11 September, up until the closing date of Monday 20 October 2008. The winners will be announced at a gala celebration with Michael Rosen at the Unicorn Theatre in London on 15 December, where they will be presented with cash prizes and poetry books, and with Children’s Poetry Bookshelf memberships for their schools. Last year’s Competition attracted nearly 5,000 entries from across the UK and overseas, and this year many more are expected.
Posted by Carousel at Wednesday, September 10, 2008 No comments:

The Roald Dahl Funny Prize is the first prize of its kind; founded to honour those books that simply make us laugh.

The Funniest Book for Children Aged Six and Under

The Funniest Book for Children Aged Seven to Fourteen

The winner of each category will receive £2,500, which will be presented at an awards ceremony in London on 13 November.

This year the theme will be picture books and some of the best writers and illustrators from the UK and abroad to theatre venues in Bexhill, London, Oxford, Newcastle, Ilkley, Bristol, Liverpool and Manchester. The writers will include Michael Rosen, Anushka Ravishankar, Posy Simmonds, Polly Dunbar and storyteller Daniel Morden


Alongside the tour is a series of 40 free schools workshops this year in primary
schools in Bexhill, London, Bristol, Manchester, Oxford, Newcastle, Liverpool,
and Ilkley so if you’re a teacher and would like a writer to come into your school,
please contact Kate Tull at Katetull@hotmail.com
Places go fast, so please book early!


Supported by the Arts Council England
Posted by Carousel at Tuesday, September 02, 2008 No comments:

Sky1 has signed up Oscar nominees Tim Roth and Kelly MacDonald as well as Life on Mars star John Simm for its new feature-length drama Skellig.

The 120-minute "modern fairytale", which is based on David Almond's Whitbread Children's Award-winning novel, is the first project to commence production from Sky1's new £10m-plus drama investment fund.

Filming began today on location in Cardiff on the high-definition drama, which will also star Son of Rambow child actor Bill Milner.
Posted by Carousel at Tuesday, September 02, 2008 No comments: