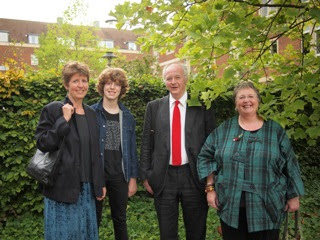 The 2011 Philippa Pearce Memorial Lecture was given by Philip Pullman on the 8th September to a full house at Homerton College, Cambridge. A video version of the lecture will be available on www.pearcelecture.com by the end of the month.

PHILIPPA PEARCE died in 2006, but respect and affection for her writing is as strong as ever. In her memory, a series of lectures is now underway, each intended to celebrate excellence in writing for children. Previous speakers have included Michael Morpurgo and Michael Rosen.

Malorie Blackman will give the 2012 lecture - for more details see http://www.pearcelecture.com/


Read Adele Geras’s report on the evening posted on 11 September on gblogadventure.blogspot.com/

School Librarian of the Year

The School Library Association created this Award in 2004 in response to the need forrecognition of the excellent work that is carried out in school libraries every day, and to highlight best practice through celebrating those whose work is outstanding. Nominees do not need to be members of the SLA, and may be from any phase of education.

You can see a exhibition of his work at The Fleming Collection, 13 Berkeley Street, London W1 from now until 22 December and also the posters he designed for London Transport at the London Transport museum, Covent Garden Piazza, London WC2 from now until the 2 December. A book is accompanies the exhibitions: John Burning an Illustrated Journey published by Fleming-Wyfold Art Foundation £19.95.
Posted by Carousel at Wednesday, September 07, 2011 No comments:

The shortlist for this year’s Scottish Children’s Book Awards has been announced today, Tuesday 6th September.

As Scotland’s largest children’s book awards, they recognise excellence in Scottish writing and illustration for children across three age categories: Bookbug Readers (0-7 years), Younger Readers (8-11 years) and Older Readers (12-16 years), with the winners decided by Scottish children themselves, who will be reading and voting for their favourite books of the year. The winners will be announced at a special awards ceremony on 23rd February 2012 at Edinburgh’s Lyceum Theatre.

So far, over 5,000 children in 81 Scottish schools and libraries have already registered to vote. In 2010, 16,000 children took part, and with registration open until 27th January 2012, this year’s awards are likely to be the biggest ever in terms of children participating!

THE 2011 SHORTLIST CONSISTS OF:

Younger Readers (8-11 years)
- ZAC AND THE DREAM PIRATES by Ross MacKenzie (Chicken House)
- THERE’S A HAMSTER IN MY POCKET! by Franzeska G Ewart (Frances Lincoln)
- THE CASE OF THE LONDON DRAGONFISH by Joan Lennon (Catnip)

Older Readers (12-16 years)
- WASTED by Nicola Morgan (Walker)
- THE BLACKHOPE ENIGMA by Teresa Flavin (Templar)
- THE PRISONER OF THE INQUISITION by Theresa Breslin (Corgi – RHCB)
Posted by Carousel at Wednesday, September 07, 2011 No comments: