A FRIEND OF CHILDREN'S BOOKS...

In the kindly but competitive world of children's books, Bev was a quiet colossus rather than a star.

Not that she missed out on the limelight. The redoubtable Eileen Colwell was an early admirer of her storytelling, her talents as a broadcaster led to a six year reviewing stint on BBC Radio 1, and the sheer spread of her publications for both children and adults - on view at the Quaker Memorial Meeting in Wigtown on May 19th - puts many more pushy kid-lit contenders to shame. Somehow, with Bev, the limelight was always refined into the glow of a good job jobbed.

It was the same when she became Children's Officer at the National Book League (later Book Trust) and with her founding directorship of REACH (the National Advice Centre for Children with Reading Difficulties) which received the Eleanor Farjeon Award in 1986. Even after 'retiring' to her beloved Wigtown - Scotland's National Book Town - Bev's commitment didn't flag. She completed an overhaul of the local festival's data-base just before she died. Unlike McCavity, when there was hard but vital work to be done, Bev was always there.

Not bad going, you may think, for someone who didn't move to Britain till she was forty. She was born and raised in Australia. This was the source, no doubt, of her drive, her grounded-ness, and her wonderful gift for friendship.

Good on you, Bev. 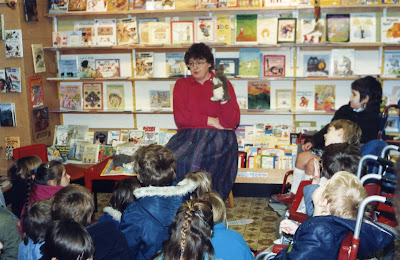 In this photo, she is entertaining (mid 1980s) a group of children from
Clare School, Norwich at the Hungate Bookshop.

This year The Children’s Bookshow is 10 with a lot to celebrate!  The  Children's Bookshow  now reaches over 6000 children every year, bringing them the very best writers and illustrators from all over the world.

2012 sees is a thrilling line up of artists -  11 authors and illustrators performing in 12 venues across the country and a programme of free workshops in schools – starting in Bexhill on 28  September and finishing in Coventry on 8th November.

From internationally acclaimed artists such as Ulf Stark (Sweden) and Carll Cneut (Belgium), to household favourites Michael Rosen and Alexis Deacon, The Children’s Bookshow is set to inspire and delight children with great poems, beautiful illustrations and fabulous stories.

It is not too late to book  in for the one-day conference, which  will include walks, lectures, readings, and parallel sessions on topics that will appeal to students, teachers, Dickens experts, and the ‘interested reader’. The event will include an evening symposium of contemporary children’s authors speaking on how reading Dickens has influenced their work. The venue is V&A Museum of Childhood, Bethnal Green, London.

For more information or to book, visit: www.le.ac.uk/engassoc/conferences/D2012.html
Posted by Carousel at Monday, May 28, 2012 No comments: 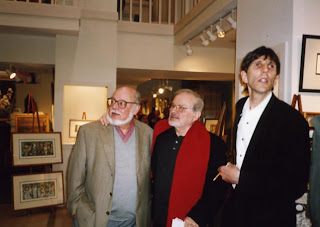 Maurice Sendak (red scarf) is seen here with Norton Juster (left) at an exhibition opening of his work - November 2002.

Maurice Sendak has died aged 83.  His long-time editor, Michael de Capua, told The New York Times that the author died in Danbury, Connecticut, USA, after complications from a recent stroke.  He wrote some 17 books and was a prolific illustrator perhaps best known for his 1963 tale of Max - Where the Wild Things Are.

The Aldeburgh Festival is staging two performances of Where the Wild Things Are and Higglety Pigglety Pop with music by Oliver Knussen played by the Britten Sinfonia.  Details on the festival website or bookings for the two performances (8 June at 7.30pm or 10 June at 2.30pm) ring 01728 687110.  No more fitting tribute to a great artist.

just to keep you all up to date...

Seven authors including three Carnegie Medal contenders on Branford Boase Award shortlist in record year for debuts The Branford Boase Award is given annually to the author of an outstanding debut novel for children. Uniquely, it also honours the editor of the winning title and highlights the importance of the editor in nurturing new talent. In a year which has seen a record number of books submitted for the award there are seven books on the shortlist:

Of this year’s shortlist, Lissa Evans, Ali Lewis and Annabel Pitcher are all shortlisted for 2012 Carnegie Medal, the UK’s most prestigious children’s book award.

This year’s judges are independent bookseller Kate Agnew, of The Children’s Bookshop Muswell Hill; Carol Webb, 2011 School Librarian of the Year; Fiona Lafferty, editorial director of the Good Book Guide and Jason Wallace, author of Out of Shadows, winner of last year’s Branford Boase Award. The panel is chaired by Julia Eccleshare, children’s books editor of The Guardian.

Julia Eccleshare says: “In 1999, the year of the first award, only 20 titles were submitted. This year 61 submissions were made, many of those extremely impressive. Our shortlist is varied in setting, themes and voice but each book succeeds brilliantly in what it sets out to do.” The winner of the Award will be announced on Thursday July 5th at a ceremony in London. The winning author receives a cheque for £1,000 and both author and editor receive a unique, hand-crafted silver-inlaid box.
Posted by Carousel at Tuesday, May 01, 2012 No comments: