Mal Peet and The Guardian Award


Walker Books congratulates Mal Peet on his recent award success for his blistering account of celebrity and the power of the media in making and breaking people’s lives. Mal Peet is no stranger to awards success, having won the Carnegie Medal for his novel Tamar and the Branford Boase and Smarties Award for Keeper, his first Paul Faustino novel. Inspired by Othello, Exposure is an engrossing, revealing read for older teenagers and adults, tackling issues of race, fame, poverty and greed. Mal Peet's writing appeals to a wide audience, but it has been particularly praised for its ability to appeal to male teenagers. Believing that writing for teenagers does not necessarily mean writing about teenagers, Mal's cast of characters are primarily adult. The quiet star at the centre of this novel, as with his previous books Keeper and Penalty, is Paul Faustino (who some might say bears a few similarities to the author himself!).

“I’m totally thrilled to win the Guardian prize. I’ve been buying the newspaper for 35 years, so I’ve worked for it! In fact, if you subtract the prize money from what I’ve spent at the newsagents, the Guardian is way ahead on the deal! I don’t mind – the Guardian prize is very special. It’s judged by other writers so it’s pretty likely that if you win it, you deserve it.”The announcement of the award coincided with a rather exciting week for Mal. He says, “It’s turned out to be a great week. I just delivered my new book to Walker. Always a nervous event, it’s called Life: An Exploded Diagram and is about a teenage love affair, nuclear missiles, mad families and explosions. Life doesn’t get much better than when you finish a novel and win the Guardian prize in the same week as your birthday and your wedding anniversary. I pass people in the street and hear them mutter, ‘who’s that grinning loon?’.”
Posted by Carousel at Thursday, October 22, 2009 No comments:

I enjoyed listening to John Connolly on R4's Today programme this morning, Friday 9 October. You can catch him on Listen Again - push the timer along to about 2.47 mins into the programme. He was talking with John Humphries about his latest book and then the dreaded word Crossover happened and here is a rough transcription of what was said:

John H: Crossover books are meant to appeal to both children and adults

John C: That's a word if any author used they should be beaten with a big stick. It is a marketing exercise...cynicism...books that are aimed to draw in an adult readership and to do that you have to wink over the shoulder of the children to the adults.

John H: You patronise the adults or you go over the head of the child

John C: You patronise both. You infantalise the adult and you patronise the child so everyone loses out.
Posted by Carousel at Friday, October 09, 2009 No comments: 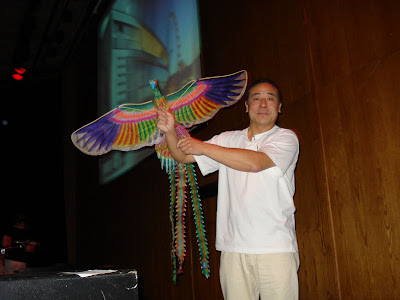 Guo Yue during a spell binding performance to a full house of school children at The Purcell Room, London on 8th October. Guo Yue and his wife Clare Farrow told the story of Little Leap Forward (published by Barefoot Books) with photographs, traditional Chinese Music (Guo Yue is a professional musician), kites and much more. The story is Guo Yue’s own story about how one little boy made a gesture, in the middle of a Revolution, that asserted his individuality and compassion, and belief in freedom. Guo Yue and Clare Farrow are also doing workshops in schools and have three more performances – The People’s Theatre, Newscastle (9 October) and two performances on 4th November at the Library Theatre in Manchester.The Children’s Bookshow is a national tour of the best children’s writer’s and illustrators which takes place in the autumn and presents a brilliant line up of writers in theatres across England. For more information see http://www.childrensbookshow.com/
Posted by Carousel at Thursday, October 08, 2009 No comments:

Lucky London children being able to easily attend this excellent 8 day festival - 21-29 November - based mainly at the Barbican. Authors Michael Rosen and Frank Cottrell Boyce will be there, a whole range of British and international films, workshops and a retro tv treat from the 80s including Count Duckula and Dangermouse (what happy memories!). www.lcff.org.uk
Posted by Carousel at Thursday, October 08, 2009 No comments:

SLA School Librarian of the year 2009 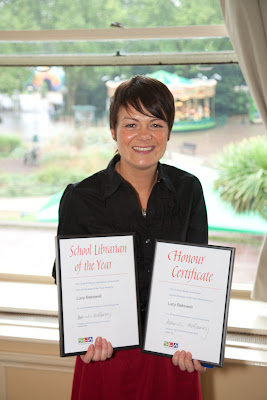 Congratulations to Lucy Bakewell of Hill West Primary School In SuttonColdfield - the SLA School Librarian of the Year 2009.
Photograph by Philip Paul .
Posted by Carousel at Tuesday, October 06, 2009 No comments:

Catherine Forde, the best-selling author of such acclaimed teen novels as Fat Boy Swim, Sugarcoated and most recently Bad Wedding, is Scottish Book Trust’s second Virtual Writer in Residence. She will be following in the successful footsteps of Keith Gray who inaugurated the role last year, and took up the post on Monday 5 October. You can see her first creative writing tips and tasks at www.scottishbooktrust.com/children-and-young-people/online-writer-in-residence
Posted by Carousel at Tuesday, October 06, 2009 No comments:

Quentin Blake at the National Theatre

Quentin Blake will be appearing on stage at the National Theatre in two platform events over the coming weeks.

Saturday 3rd October 2009 at 10.30am Roald Dahl Day To celebrate the fourth annual Roald Dahl Day, his principal illustrator Quentin Blake will draw live on stage, in the company of actors who read from Dahl’s ever-popular books.
This platform is followed by a book signing, but please note that Quentin will only be able to sign one book per person.

Friday 13th November 2009 at 6pm Quentin Blake and David Walliams Little Britain’s David Walliams is joined by his illustrator to talk about his new children’s book, Mr Stink, a hilarious tale of family secrers….and a tramp in a shed.
Followed by a book signing.
Tickets are £3.50, or £2.50 for concessions.

To book please contact the National Theatre Box Office on 020 7452 3000 or go to www.nationaltheatre.org.uk
Posted by Carousel at Thursday, October 01, 2009 No comments: