There has now appeared (20.5.10) an obit in The Independent by Nicholas Tucker which is very well worth reading. (see March blog entry)
Posted by Carousel at Monday, May 24, 2010 No comments:

Meet Our Authors is an exclusive series of authors’ events streamed live over the internet to provide young people, parents and teachers with the chance to get up close and personal with some of the world’s leading children’s writers. The programme is the first of its kind in the UK. Anyone can sign up to watch and it is completely free.
On 26 May at 11am, Julia Donaldson will talk to a live audience while being filmed and broadcast simultaneously over the internet to tens of thousands of viewers across Scotland. An astounding 65,000 children in more than 800 schools have already signed up to the event, which is supported by digital media including Facebook and YouTube featuring event information and exclusive video clips.
Julia Donaldson said: “I am terribly excited about this very special event! Not only will I be talking to a live audience in Glasgow, but I am also going to be interacting with tens of thousands of other children across Scotland who will be tuned in on their computers - either watching from their school or at home - and who will have opportunities to ask me questions directly. I have spoken to large audiences in the past but never to that many people so this will definitely be a memorable experience for me too!”
The series of live events forms the centrepiece of a two-year long programme that will feature household names including Michael Morpurgo, Philip Pullman, Eoin Colfer, Charlie Higson and Jacqueline Wilson. The first live broadcast took place on World Book Day in March with former Children’s Laureate Michael Rosen, to which over 100,000 children logged on.
Jasmine Fassl, of the Scottish Book Trust, commented: “Julia has written many well-loved and best-selling children’s books and The Gruffalo has become something of a national institution for today’s young readers. Those logging on to see Julia in action are in for a big treat and will be taking part in an event that will shape the way in which authors interact with their readers in the future.”
Neil Lovatt, sales and marketing director of Scottish Friendly, sponsor of Meet Our Authors, said: “The phenomenal demand for this event is evidence that the passion for reading at an early age is as strong as ever. Scottish Friendly has worked closely with Scottish Book Trust for over 11 years to ensure that children even in the most rural areas have equal access to the work of leading authors. We’re excited to bring to life the world of reading and writing to thousands more children in a revolutionary and interactive way.”
Full details on ‘Meet Our Authors’, including forthcoming events and information on Twitter and YouTube links can be found at www.facebook.com/meetourauthors
To watch a preview of Julia Donaldson’s event go to www.facebook.com/meetourauthors
As part of the campaign, parents have the opportunity to win a Gruffalo trunki full of fantastic Gruffalo goodies. Competition details can be found at www.facebook.com/meetourauthors
Posted by Carousel at Monday, May 24, 2010 No comments:

Gruffalo at the Seaside

A Fairytale Holiday Camp with fancy dress, magical moments and family friendly mayhem! THE AWARD WINNINGCAMP BESTIVAL (30th, 31st July & 1st August 2010, Lulworth Castle, Dorset) A starry-eyed Rob da Bank says: 'Anyone with a child younger than 4 or 5 will know the story of The Gruffalo. We are over the moon to be able to announce that The Gruffalo, recently voted most beloved bedtime story by BBC Radio 2 listeners is coming to Camp Bestival! Adapted from Julia Donaldson and Alex Scheffler’s best selling book and performed by Tall Stories whose unique brand of physical story theatre has taken them around the world, the show will bring to life the amazing story of the clever Mouse’s journey through the forest as he beguiles the creatures who’d like to eat him with tales of his friend the Gruffalo’s terrible tusks and terrible claws, until he encounters the Gruffalo’s terrible teeth in his terrible jaws for himself. With two shows over the weekend, one on the main stage and another in the Little Big Top, you definitely don’t want to miss this irresistibly magical musical take on a classic that has sold out on tours across the UK and even on Broadway and is the perfect family entertainment. One not to miss! Bestival has already sold out and tickets are flying for Camp Bestival so make sure you get it together and come and join us at a fairytale castle by the sea for a weekend of magical mayhem and family fun! For all the latest news remember to keep checking www.campbestival.net -- Full Line Up So Far: Featuring: English National Ballet /// River Cottage Café /// Mr Tumble /// The East Lulworth Literary Institute /// Zippo's Festival Circus /// The House of Fairytales /// Let's Go Crazy /// Son et Lumiere /// Boutique Babysitting /// Freestyle Sports Park /// The Hip-Hop Shakespeare

The illustrations sold out within a few minutes of going on line ... but you can still see the exhibition in London, see earlier post.
Posted by Carousel at Friday, May 21, 2010 No comments:

The 2010 shortlist for the Branford Boase Award is announced. The Award is given annually to the author of an outstanding debut novel for children.
The books on the shortlist are:
Devil’s Kiss by Sarwat Chadda, edited by Lindsey Heaven (Puffin)
Stolen by Lucy Christopher, edited by Imogen Cooper (Chicken House)
Life, Interrupted by Damian Kelleher, edited by Anne Clark (Piccadilly Press)
Guantanamo Boy by Anna Perera, edited by Shannon Park (Puffin)
Big and Clever by Dan Tunstall, edited by Ross Bradshaw (Five Leaves)
Numbers by Rachel Ward, edited by Imogen Copper (Chicken House)
Paradise Barn by Victor Watson, edited by Leonie Pratt (Catnip)
The Branford Boase Award was set up to encourage new writers and is given each year to the most promising work of fiction for children by a first time novelist. The Branford Boase also honours the editor of the winning title and highlights the importance of the editor in nurturing new talent.
The Branford Boase judging panel has an uncanny ability to pick future best-selling and critically acclaimed authors. Previous shortlisted and winning writers include Marcus Sedgwick, Meg Rosoff, Philip Reeve, Cathy Cassidy, Kevin Brooks, William Nicholson, Frank Cottrell Boyce, Mal Peet and Bali Rai.
So, the pressure is on for this year’s eminent judging panel: Helen Boyle, editor of tBk magazine, Tricia Adams, executive director of the School Library Association, John Newman, children’s buyer at the Newham Bookshop and Chair of the Booksellers Association’s Children’s Bookselling Group and B R Collins, author of The Traitor Game, winner of last year’s Branford Boase Award. The panel is chaired by Julia Eccleshare, children’s books editor of The Guardian.
Julia Eccleshare says: “This year’s shortlist has really impressed the judges. These engaging and accomplished novels are full of integrity and superb story telling. It is going to be difficult to pick a final winner.”
The winner of the award will be announced on July 14th at a ceremony in London. The winning author receives a cheque for £1,000 and both author and editor receive a unique, hand-crafted silver-inlaid box.
Posted by Carousel at Thursday, May 20, 2010 No comments:

"The objective of the Just Read Campaign is for every child in the UK to become a reader. This campaign is not about making children functionally literate. It goes beyond that. All the research shows that the child that reads for pleasure is more likely to achieve. Unfortunately, both the government’s own statistics and international research show that reading standards are not improving in the UK and that enjoyment of reading is declining.
Not every child comes from a reading home. Sometimes, these children are denied the cognitive, social and cultural advantages that reading for pleasure provides because their schools do not have a reading culture either.
These children are doubly let down."
For the full statement and to sign the petition go to www.justreadcampaign.co.uk
Carousel urges everyone to sign this petition and join this extremely worthwhile campaign.
Posted by Carousel at Tuesday, May 18, 2010 No comments: 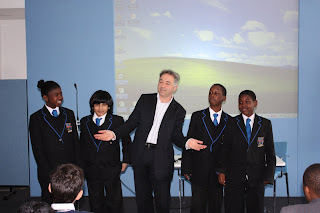 Photograph taken on 12th May - Frank Cottrell Boyce with students from Petchey Academy in Hackney, London who won the best student presentation prize in the Hackney Schools’ Short Novel Awards for a detailed and original response to short novel published by Barrington Stoke. The event was organised to celebrate achievements of students taking part in a pioneering programme run by the Learning Trust in Hackney.
Winning readers – students from five secondary schools in Hackney have been taking part in ‘Literacy Intervention Toolkit’ (LIT), a pioneering programme, run by the Learning Trust, created to tackle low levels of literacy and to encourage reading for pleasure. By the end of the year most had read five Barrington Stoke short novels. The purpose of the event was to provide low level readers with the same opportunities as Gifted and Talented students. Petchey Academy won the prize for the best student presentation for their detailed and original response to Joanna Kenrick’s ’Mindset.’ They won cinema tickets for the Vue in the Angel.
At the end of the day the students voted for the book they wanted to win the Hackney Schools’ Short Novel Award. The winner was the gory Night Hunger by Alan Gibbons, followed closely by Frank Cottrell Boyce’s comedy read, Desirable.
Alan Gibbons comments:
"I am delighted to win this award. Anyone who can help young people develop the Reading habit is giving them a precious gift. Thanks to the young people of Hackney for this recognition."
Jodie Warner from The Learning Trust adds:
“The first Hackney Schools’ Short Novel Awards event has exceeded expectations, taking a group of students who have not often had a positive experience of reading and creating amongst them an excited buzz about books.”
Many thanks to Linklaters and Get Hackney Reading, whose support has provided each school with a set of books as well as the gift of a book to each student, personally signed to them by the author.
Posted by Carousel at Monday, May 17, 2010 No comments:

SUMMER HALF TERM FUN AT THE NATIONAL GALLERY

Featuring over 60 illustrations from books published throughout his career including; The Gruffalo, Room on the Broom, Stick Man, Mother Goose’s Nursery Rhymes, Tabby McTat, and many others; this is the first time so much of Axel’s original artwork will be on display and available for purchase.
Further information from www.imagesofdelight.com
Posted by Carousel at Saturday, May 08, 2010 No comments:

Just Macbeth
By Andy Griffiths
Bell Shakespeare’s Just Macbeth, directed by Wayne Harrison (Tap Dogs), is a really silly version of Shakespeare’s great big gory tragedy. It has got six funny but tragic actors, a garden gnome and a severed head that talks Shakespearean. Plus, there are witches, Wizz Fizz, ghosts, girl germs and weird Elizabethan things like soliloquies and sharp words and other things beginning with S.

An hilarious and irreverent take on one of Shakespeare’s most popular plays.

This family show is recommended for 7plus. It runs from Saturday 7 August to Sunday 29 August at 11am and lasts 90mins. Assembly Rooms, 54 George Street, Edinburgh. Box Office 0131 623 3030 http://www.assemblyfestival.com/
Posted by Carousel at Wednesday, May 05, 2010 No comments: