Ten years of the Children's Laureate 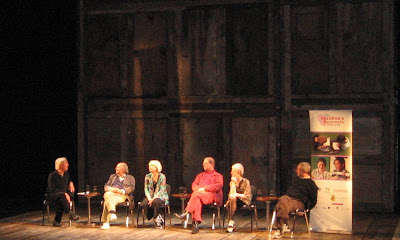 A Platform discussion took place yesterday, Monday 27 April, on the Olivier stage to celebrate the first decade of the Children's Laureate. I sneaked a quick photograph - being well aware that you never take pics in the theatre - and so it is rather unclear but does show from left to right Professor John Mullan and then in order of their laureateshipness (is there such a word?) Quentin Blake, Anne Fine, Michael Morpurgo, Jacqueline Wilson and Michael Rosen. The new laureate will be announced on Tuesday 9 June.

The session began by John Mullan asking the Laureates in turn how they approached the task. The range of approaches was fascinating.

Quentin Blake: He decided not to take up the limited time by talking to schools but to talk to teachers, parents, publishers indeed anyone involved in the children's book world in an attempt to get everyone to take the business seriously. He published the excellent "Words and Pictures" (Jonathan Cape) and a fine exhibition of illustrations from A-Z at the National Gallery.

Anne Fine: "You were free to do things that would normally be a cheek...". She set up the home library set of book plates www.myhomelibrary.org where you can still access book plates provided by some the best illustrators around; the Clear Vision Project which included braille picture books; three poetry anthologies "A Shame to Miss" and countless speaking engagements.

Michael Morpurgo: "I had the distinct advantage of being a reluctant reader...and of being a fairly late convert to reading, so I have all the zeal of a convert!" He told tales around the country from the far north to the deep south and abroad from Russia to Soweto.

Jacqueline Wilson: She wanted to emphasise the importance of reading a story at bedtime; appeared in many unexpected for an author places ie. carnivals; took part in the Laura Bush Reading Festival and so visited the White House; visited Buckingham Palace for the 80th birthday celebrations of the Queen and introduced HRH to the range of children's authors present.

Michael Rosen: "I don't really look for dignity and found the post a wonderful challenge... There is a terrific range of children's books available but perversely in schools between the ages of seven and fourteen most are not using books as anything but an optional extra and spend their time working on worksheets". He urged everyone to visit the free exhibition at the British Library "Twinkle Twinkle Little Bat - 250 years of poetry from children"; talked of meetings with ministers/teachers/librarians you name it and of his forthcoming (August from Puffin)"Michael Rosen's A-Z The Best of Children's Poetry from Agard to Zephaniah".

The time - all too brief - then opened out into a discussion of adaptations of books whether by illustration, television, film, cartoon or theatre.
Posted by Carousel at Tuesday, April 28, 2009 No comments:

The full list of titles on The Laureates’ Table is as follows:

16. Mike Mulligan and his Steam Shovel by Virginia Lee Burton (1939)

Incidentally you can see all these in Waterstones Book Shops as they are one of the sponsors of the Children's Laureate. If you go to their website you will see they have some strange authors for some of the titles... (Never too certain about one set of bookshops sponsoring a national post). I understand from the Today Programme interview this morning, 28 April, with Anne Fine and Michael Morpurgo that they were asked to provide lists of 12 books. AF regretted the loss of "Frog and Toad" I wonder what other books missed out. When asked why most of the books were not recent they explained that they were all a bit long in the tooth and these, on the whole, were books from their own childhood reading.
Posted by Carousel at Tuesday, April 28, 2009 No comments:

The winners will be announced on 25 June.
Posted by Carousel at Friday, April 24, 2009 No comments:

I am glad to inform you that Tamer Institute for Community Education has been awarded the prestigeous Astrid Lindgren Memorial Award it is the best gift to our children and to Palestine in these traumatic difficult period!

The 2009 Astrid Lindgren Memorial Award has been awarded to the reading promotion organisation the Tamer Institute for Community Education, which works in the West Bank and Gaza.

With perseverance, courage and resourcefulness, the Tamer Institute has stimulated Palestinian children’s and young people’s love of reading and creativity for two decades. Under difficult circumstances, the Institute carries out reading promotion work of an unusual breadth and versatility. In the spirit of Astrid Lindgren, the Tamer Institute sees the power of words and the strength of books, stories and the imagination as important keys to the courage to face life, self-esteem and tolerance.

Press material is also available in Arabic, English, French, Italian, Spanish and German. A presentation of the award winner is attached. To book interviews with the award winner and representatives of the jury, please contact agnes.lidbeck@alma.se or call + 46 (0)76-540 10 17.

The award will be presented by HRH Crown Princess Victoria on 2 June in the Stockholm Concert Hall in the presence of the Swedish Minister for Culture, Lena Adelsohn Liljeroth.

The Astrid Lindgren Memorial Award (ALMA) is the world’s largest prize for children’s and young people’s literature. The prize totals SEK 5 million (equivalent to approx. USD 578,000, 445,000 EUR) and is awarded annually to a single recipient or to several. Authors, illustrators, storytellers and those active in reading promotion may be rewarded. The prize aims to strengthen and increase interest in children’s and young people’s literature globally. The award is designed to strengthen children’s rights at global level. An expert jury names prize-winners who are nominated by institutions and organisations worldwide. The Astrid Lindgren Memorial Award is administered by the Swedish Arts Council.

The Tamer Institute for Community Education in Ramallah is an independent organisation that has carried out reading promotion work for children and young people in West Bank and Gaza since 1989. The Tamer Institute was founded to give children access to books and alternative learning as children’s and young people’s schooling, leisure time and lives suffered from the troubles in the area. The Tamer Institute also hands out reading passports. Holders get a stamp for every book they have read. This is a clear symbol of the fact that there are no borders for those who can read books. As Astrid Lindgren said: “Good children’s literature gives the child a place in the world and the world a place in the child”.

The Tamer Institute is the hub of a network that works with writing workshops, storytelling, drama and literary discussion for children and young people. They supply libraries with children’s books and they train librarians and parents. A national reading campaign is organised every year, culminating with National Reading Week. In 2008, the campaign reached 52,000 children in refugee camps and remote villages and communities, who took part in literary discussion, drama and drawing and writing workshops.

The Tamer Institute also carries out youth activities. The young people, who have often participated in Tamer’s work since they were children, publish their own newspaper, Yara´at, among other things. They use it to publish their thoughts, poems and stories. When the Tamer Institute was founded, there were virtually no Palestinian children’s books. The organisation has now published more than 130 titles and several of the children who attended the Tamer Institute’s writing workshops have started to write their own books as adults.

Despite difficult circumstances, the Tamer Institute works tirelessly on many levels to create a better situation for Palestinian children and young people via literature. Their conviction that words can tear down walls has resulted in innovative reading promotion activities of an unusual breadth, for which reason the Tamer Institute has been awarded the 2009 Astrid Lindgren Memorial Award

www.tamerinst.org
Posted by Carousel at Monday, April 13, 2009 No comments:

The prize, which is worth £5000, is awarded for 'a significant contribution to the public understanding of Classics'. The council agreed that 'The Roman Mysteries', with their exemplary combination of entertainment and education, thoroughly fulfilled this criterion. The award was presented on Sunday 5 April, at a ceremony held in Glasgow.

This will be the fifth year the prize has run, having previously been awarded to: Barbara Bell for the 'Minimus' primary-school Latin project, Hugh Lupton and Daniel Morden for the 'War With Troy' project, Tom Holland for his book 'Persian Fire', and Peter Parsons for 'City of the Sharp-Nosed Fish'.

See Caroline’s blog on the ceremony here - http://flavias.blogspot.com/ and Mary Beard’s blog on the prize here - http://timesonline.typepad.com/dons_life/2009/04/the-ancient-greeks-and-global-warming.html
Posted by Carousel at Tuesday, April 07, 2009 No comments:

The winners of Scottish Book Trust’s innovative young people’s writing competition were announced today (31st March 2009) at the National Library of Scotland in Edinburgh, selected from nearly 250 young people from across Scotland and abroad who had submitted stories.

All 11 shortlisted teenagers were subsequently invited to apply for the Scottish Book Trust young people’s mentoring scheme, a new initiative to help three young people hone and develop their writing over a period of 6 months. The mentoring will consist of a mixture of face-to-face and online tutorials with Scottish Book Trust’s virtual writer-in-residence Keith Gray, as well as a visit to a top UK children’s fiction publisher and a meeting with a children’s literary agent.

After the short ceremony at the National Library of Scotland, 10 of the 11 shortlisted students stayed on for an exclusive writing workshop with Keith Gray.
Posted by Carousel at Monday, April 06, 2009 No comments:

The new film of SKELLIG, based on the multi-award winning novel by David Almond, is premiered on Sky1 at 7pm on Easter Sunday, 12 April, 2009.
All star cast includes Tim Roth as Skellig, John Simm and Kelly Macdonald as the parents, Bill Milner as Michael, Skye Bennett as Mina.

More info at the Skellig website:
http://www.sky1.co.uk/skellig/index.php
Posted by Carousel at Monday, April 06, 2009 No comments: