The shortlist for the Red House Children’s Book Award (RHCBA) has been announced. The award - unique in being chosen by children throughout the country - is administed by the Federation of Children's Book Groups (FCBG) and sponsored by Red House. Publishers submitted 838 books this year.

Voting is now open to find the category winners and an overall winner. Anyone under the age of 16 can participate by simply logging onto the RHCBA website, www.redhousechildrensbookaward.co.uk and completing the voting form before the closing date of May 11.

A personal comment: delighted to see The Pencil has made the short list - if I had my way it walk off with every prize going! enid stephenson
Posted by Carousel at Monday, February 23, 2009 No comments:

The Exhbition is at the New Hall Art Collection, in what used to be New Hall and is now Murray Edwards College, until 14 march. There is also a seminar on Creating a Picture Book for Children on Saturday 28 February.

Seminar on creating a Picture Book for Children
28 February 2009 10am- 4pm
£20 (£16 student) including materials and lunch in The Long Room, New Hall Art Collection at Murray Edwards College

This practical seminar will provide a unique environment in which to trial your ideas for a children's picture book.

Free - lance illustrator and tutor, Sylvia Lynch will offer help and instruction in the application of ideas, page layouts and storyboards, up to the construction of a dummy book. Professional advice on approaching publishers and notes related to further study will also be included.

This workshop is given in collaboration with the Seven Stories Writers and Artists Group (SSWAG), who will be exhibiting their work in the Temporary Exhibitions Gallery, 15 February – 14 March

For more information and to buy tickets, please contact Amanda Rigler on 01223 769404 or by email at art@newhall.cam.ac.uk
Posted by Carousel at Saturday, February 21, 2009 No comments:

Family Portrait Week (14_21 March 2009) is an exciting concept to raise awareness of the importance of family portraiture while also raising substantial funds for The Variety Club of Great Britain, one of the UK’s major children’s charities.

Take advantage with this special offer of a complimentary portrait sitting and print to every family that donates £25 direct to the Variety Club of Great Britain.

To make your donation and book your sitting, (which can take place within six months and will be supplied by qualified Master Photographers) or for more information, please visit www.familyportraitweek.com. Donations and bookings can be made from Sunday 1 March 2009.
Posted by Carousel at Friday, February 20, 2009 No comments:

Family Art Workshops: Write Stuff
Saturday 21 March 2009, 11.30 and 14.30
Third Saturday of every month. In celebration of World Poetry Day, meet some of the Galleries famous poets before creating a bound book of your own to fill with your own poetic creation. Suitable for ages 5+.

Storytelling for Families: The Perfect Performance
Saturday 21 March 2009, 14.00 and 15.00
Drop-in sessions on the third Saturday of every month. A magical story of a young dancer's dream to see her favourite dancer perform. Based on the portrait of Margot Fonteyn. Suitable for ages 3+. No ticket required. Meet in the Ondaatje Wing Main Hall. Sessions will last about 30 minutes.
Posted by Carousel at Friday, February 20, 2009 No comments:

Adapted from the ground=breaking book published by Barrington Stoke, BABY BABY had attracted sell-out crowds from Shetland to Glasgow. Due to demand, it now relocates to the Traverse Theatre in Edinburgh from March 3rd - 5th before travelling to Easterhouse, Glasgow; Cumbernauld, Aberdeen; Kirkcaldy and Castle Douglas.

Two teenagers - both completely opposite in character but united in one problem. Both are pregnant! Aimed at 13+, it is a hard-hitting play with a highly relevant message for today's young people.

For further information: www.stellarquines.com
Posted by Carousel at Friday, February 20, 2009 No comments:

Congratulations to first time writer Michelle Harrison for winning the 2009 prize with her novel The Thirteen Treasures" published in paperback by Simon and Schuster Children's Books.
Posted by Carousel at Friday, February 20, 2009 No comments:

It appears that at a time when all councils are anxious to save money libraries are under threat. If you are concerned and hear of possible closures why not contact the Campaign for the Book - see earlier blog.

It has just been reported by a Swindon councillor that the council's cabinet has recommended the closure of FOUR libraries within the authority.

Free access to books is something we have taken for granted for so long and is vital, I think, for the health (physical and mental) of the nation.
Posted by Carousel at Thursday, February 12, 2009 No comments: 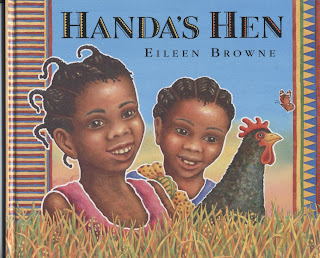 Colourful puppets,movement and song are combined in this production. Come to Handa's Kenyan village where Grandma's black hen, Mondi has gone missing. Handa and her friend, Akeyo look everywhere. They find fluttery butterflies, stripy mice, jumpy crickets, baby bullfrogs and lots of other animals. But where is Mondi - and what's her secret?

This is the text of an open letter to Culture Secretary Andy Burnham from the Campaign for the Book.

Dear Andy,
As you will know, Wirral council has voted to close eleven of its 24 libraries in the face of huge popular opposition
You said last October at a conference in Liverpool that you were 'committed to the provision of a comprehensive library service' and that this was 'absolutely non negotiable.'
I understand that you have a duty as Culture Minister to assure that, under the 1964 Libraries Act, there will be a 'comprehensive and efficient service.'
If democracy means anything you must surely act. I understand that you are an Evertonian and a supporter of the 'People's Club.' I call on you to become the people's champion and stop these philistine cutbacks, which are taking place just a stone's throw from Liverpool, the 2008 City of Culture.
Evidence from the US, Canada and many areas of the UK indicates that the recession has led to increases of library usage of up to a third. Many councils are building new libraries or transforming existing ones into thriving centres where books and information technology co exist in an exciting symbiosis.
We must not throw away this vital cultural and community lifeline.
Please act and act now to prevent Wirral becoming a byword for cultural vandalism.
Yours faithfully,
Alan Gibbons
Author and organizer of the Campaign for the Book
aagibbons@blueyonder.co.uk
Posted by Carousel at Wednesday, February 11, 2009 No comments:

Library Cuts: News from Campaign for the Book

Dear all,
You may have heard that the Wirral cuts have gone through. I enclose my statement below. The full story is on www.alangibbons.net. I am in Bahrain on a speaking tour so I have a limited address book with me. Please circulate this wildly.
Best wishes,
Alan Gibbons


Alan Gibbons comments:
“This is a very grim day for everyone who lives on the Wirral but also everyone who believes in the power of books to excite, nurture, nourish and inspire. The decision of the councillors who voted to push through the closure of eleven libraries in the face of huge popular protest amounts to nothing other than a calculated act of cultural vandalism. The only reason given for the reduction of service during this whole sorry saga was cost-cutting. Not one councillor engaged with the arguments of those who opposed this wretched philistinism. It is a bit rich for council leader Steve Foulkes to welcome the level of consultation. The whole point of consultation is to listen to the people you represent. Consultation without negotiation is a sham. Councillor Foulkes has ignored the arguments of the public in a graphic assault on local democracy. Once upon a time they burned books, now they close the doors and bar the community’s access through ill-conceived service reductions.
“Several Lib Dem councillors broke ranks. Sadly, not one Labour councillor had the decency to do the same. The Campaign for the Book is non political but I know that many of its supporters are life-long socialists and Labour voters. It is galling for them to see Labour councillors forcing through policies which will impact negatively on the right to read.
“Ironically, on the same day that Wirral’s decision was announced, it came to light that there has been a big jump in library membership across Cumbria. Almost 5,000 people joined the library between September and December last year, a 39% increase on the same period in 2007.
“Councillor Barbara Cannon said: ‘These are difficult times and the county council is working hard to help people through the recession. The library service is a resource that is there for everyone to use and I am heartened to see that people are recognizing this and joining up.”
“The Campaign for the Book agrees with that statement and wonders why Wirral council does not understand that, in a recession, people seek a refuge in culture. They want bread but they want roses too. We will continue to oppose this retrograde step. We call on all supporters to write to Andy Burnham at the DCMS asking for him to rule whether the council is providing a comprehensive and efficient service as required under the 1964 Museums and Libraries Act. If this fails then yes, councillor Foulkes, we will work with you to salvage a decent service from the carnage your administration has wrought in local communities. The Campaign for the Book will never shirk its responsibility to the reading community.”
Posted by Carousel at Tuesday, February 10, 2009 No comments: