Speed dating sessions in Worcestershire schools has resulted in a list of 6 top dates. Students around the county have been speeding through titles of books to choose their top 6. These will now be read over the Spring term and a winner decided at an exciting quiz and celebration event in the Council Chamber in March 2012.

Ultraviolet by R. J. Anderson
Diary of a lottery winner's daughter by Penelope Bush
An act of love by Alan Gibbons
Wish me dead by Helen Grant
Forgotten by Cat Patrick
There is no dog by Meg Rosoff

Announcement of winner and presentation will be in the Worcester MLS logoCouncil Chamber on 22nd March 2012 when we have the author Jon Mayhew attending, kindly sponsored by MLS.
Posted by Carousel at Thursday, December 15, 2011 No comments:

The Federation of Children’s Book Groups is delighted to announce that it has won the 2011 Eleanor Farjeon Award. The Eleanor Farjeon Award is coordinated by the Children’s Book Circle and is given to individuals or organisations that have been deemed to have made an outstanding contribution to the world of children’s books. The award is a great honour for the Federation, its members and its National Executive.

At a ceremony in London the Children’s Book Circle and Anne Harvey, from the Eleanor
Farjeon estate, presented the £200o gift to Chair Adam Lancaster. In his acceptance speech Adam spent time passionately talking about the work that everyone in the charity is involved in. This ranged from groups running numerous events in their localities with a number of partners to the national executive working as an umbrella providing opportunities for a whole host of events to take place.

Adam, who is also founder of National Non-Fiction Day, explained the Federation’s past and thanked all the people over the years that played a part in creating hundreds of thousands of readers. ‘Everyone involved in the Federation is a special person. They are the ones on the front line, working with tens of thousands of young people each year, doing those things that politicians and suited board men talk about. To be awarded this honour is to recognise all those people who over the years have played a part in igniting that spark andfanning those flames of reading. Books change lives. The Federation changes lives.’
Posted by Carousel at Friday, December 02, 2011 No comments:

This year a record-breaking 222 schools from across Sheffield were involved with Sheffield's Children's Book Award. The winners are chosen exclusively through the votes of these young readers.

The Pig's Knickers, by Jonathan Emmett and Vanessa Cabban scooped the top prize.
This hilarious tale of a prancing pig and his polka dot knickers captured the hearts of local children, whose votes ensured it was not only voted the Picture Book Category Winner, but that it was also crowned Overall Winner!
The other books with prizes for the Picture Book category were: Steve Smallman and Lee Wildish's Dragon Stew, which won the Highly Commended prize, along with Mini Grey's Three by the Sea, which won the Commended prize.

In the Shorter Novel Category David Walliams took the top spot, winning the category with his book Billionaire Boy; the heart-warming tale of Joe Spud, the richest twelve-year old in the world, whose only wish is to have a friend.
Jim Eldridge won the Highly Commended prize for his book Disgusting Dave and the Flesh-Eating Maggots. While Katie Davies won the Commended prize for her shorter novel The Great Hamster Massacre.

In the Longer Novel Category, it was Malorie Blackman who was voted the category winner for her dramatic and emotional book, Boys don't Cry, which tells the story of a teenage boy who is just about to embark on adulthood when he discovers he is a father.
Sharon Dogar won the Highly Commended prize for her book Annexed, while Andy Mulligan scooped the Commended prize for his novel Trash.

The winner of the Teachers' Favourite Book was Terry Deary's Put out the Light; a shorter novel which tells the parallel stories of a brother and sister living in Sheffield and two boys growing up in Dachau, Germany, as all four struggle to survive the ravages of the Second World War.

Finally the winner of the Baby Book Award was Noisy Peekaboo! Roar! Roar! by Dorling Kindersley, which adds a new dimension to lift-the-flap books, with its accompanying wild animal noises.
Posted by Carousel at Friday, December 02, 2011 No comments:

Bali Rai, author of young adult titles The Crew and (Un)arranged Marriage, has taken over as Booktrust Writer in Residence. He is the sixth author to take up the position, and takes over from Clare Wigfall. In his online statement, Bali said "Booktrust is such a powerful voice in support of reading for pleasure and literacy and I feel honoured at being asked to step in."

To promote the concept of "reading for pleasure" at every given opportunity and to continue to link it with achievement in education
To encourage parents, teachers and schools to increase their focus on reading for pleasure and to support the maintenance and promotion of books, school libraries and librarians
To encourage teens and young adults to participate in the wider debate around reading and literacy. This will hopefully include a panel event at the London Book Fair in which teenagers will be asked questions by the publishing industry
To promote the concept of wider diversity in teen and young adult fiction and to challenge the artificial divide between "adult" and "young adult" books
To promote and support a new teenage section on the Booktrust website by encouraging participation from young adults at all levels, through short story competitions, book reviews etc
To actively support any organisation or campaign that seeks to promote literacy, reading and the great work done by public and school libraries.

Booktrust has a new website - go to www.booktrust.org.uk
Posted by Carousel at Friday, December 02, 2011 No comments: 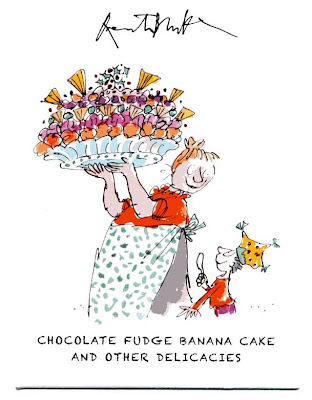 A few yards away from the bustle of Piccadilly is the Chris Beetles Gallery where on Sunday 11 December to lively music by the Jelly Rollers you can buy pictures by that master of festive jollity Quentin Blake - the man himself will be there at 8-10 Ryder Street, London SW1. And if you can't get there then the exhibition runs until 7 January, 10am to 5.30pm.

And just round the corner at 22 Bury Street the Illustration Cupboard are holding their Winter Exhibition until the very end of January.
Posted by Carousel at Thursday, December 01, 2011 No comments: